The Richat Structure, more famously known as the Eye-Of-Africa. No, not the eco-estate down Eikenhof way, the massive blue-eye structure in the Sahara desert.  The Eye Of Africa (also known as The Eye Of The Sahara) is one of the coolest geologic formations in the world and is located in the Sahara desert near Ouadane, west–central Mauritania. It has a diameter of 50 kilometers. The feature is so big that NASA has used the Eye as a global landmark.

The origin, of this perfectly circular blue shaped body, has been heavily debated by geologists. Meteor impacts & hot volcano plumes have been discussed, as the reason for its formation, among a few other theories. Whatever caused it, astronauts love to observe the Eye of Africa from space because it looks like the landing site of a 40-kilometer wide flying saucer.

Finding The Eye is not easy, or rather, exceptionally easy.  The issue is simply that you won’t realise that you are in it, as it is rather mundane desert all around you.  For geologists, its heaven sent, for Joe Soap, it’s just sand.  It’s beauty can only be seen from the heavens up above.

See satellite images of the Eye of the Sahara, below. 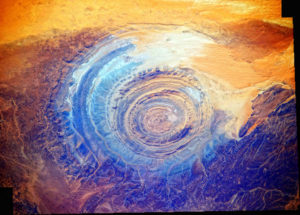 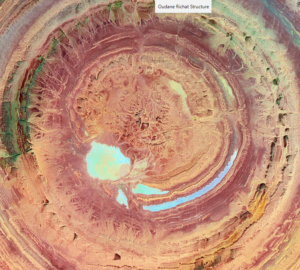 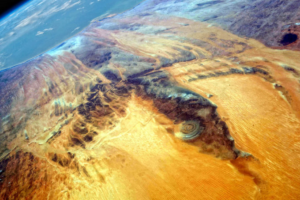