The Daily RCF Weather & Extra Bit. The letter Z – Removed from the Alphabet for 200 Years

The letter Z was removed from the alphabet for 200 years.

It’s hard to imagine an alphabet that doesn’t include A, Z, and every other letter in between. However, around 300 BC, the Roman censor Appius Claudius Caecus had Z removed from the alphabet due to the fact that it wasn’t used that much. The letter S was also nixed and the letter G was added. It took another 200 years for Z to make its way back to the end of the alphabet.

Clearly there’s good news for all the zebras lovers out there, though. Z made its way back to the alphabet so kids could learn an alphabet that stretched all the way from A to Z.

Z was not always the final letter of the modern English alphabet, although it has always been in the 26th position. For years the  &  symbol was the final, pronounced “and” but recited as “per se,” meaning “by itself.” The position and pronunciation eventually ran together: “X, Y, Z, and per se and” became “X, Y, Z, ampersand.” 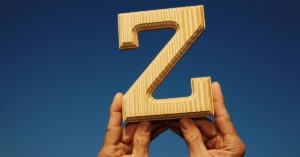